In this blog post, I’ll write about how I tried to fuzz the MSXML library using the WinAFL fuzzer.

If you haven’t played around with WinAFL, it’s a massive fuzzer created by Ivan Fratric based on the lcumtuf’s AFL which uses DynamoRIO to measure code coverage and the Windows API for memory and process creation. Axel Souchet has been actively contributing features such as corpus minimization, latest afl stable builds, persistent execution mode which will cover on the next blog post and the finally the afl-tmin tool.

We will start by creating a test harness which will allow us to fuzz some parsing functionality within the library, calculate the coverage, minimise the test cases and finish by kicking off the fuzzer and triage the findings. Lastly, thanks to Mitja Kolsek from 0patch for providing the patch which will see how one can use the 0patch to patch this issue!

Using the above steps, I’ve managed to find a NULL pointer dereference on the msxml6!DTD::findEntityGeneral function, which I reported to Microsoft but got rejected as this is not a security issue. Fair enough, indeed the crash is crap, yet hopefully somebody might find interesting the techniques I followed!

While doing some research I ended up on this page which Microsoft has kindly provided a sample C++ code which allows us to feed some XML files and validate its structure. I am going to use Visual Studio 2015 to build the following program but before I do that, I am slightly going to modify it and use Ivan’s charToWChar method so as to accept an argument as a file:

Essentially, this allows us to use target_method argument which DynamoRIO will try to retrieve the address for a given symbol name as seen here.

I could use the offsets method as per README, but due to ASLR and all that stuff, we want to scale a bit the fuzzing and spread the binary to many Virtual Machines and use the same commands to fuzz it. The extern "C" directive will unmangle the function name and will make it look prettier.

To confirm that indeed DynamoRIO can use this method the following command can be used: 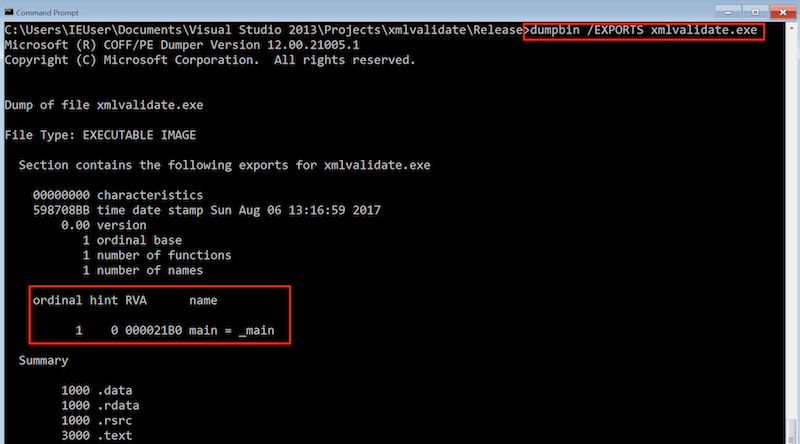 Now let’s quickly run the binary and observe the output. You should get the following output: 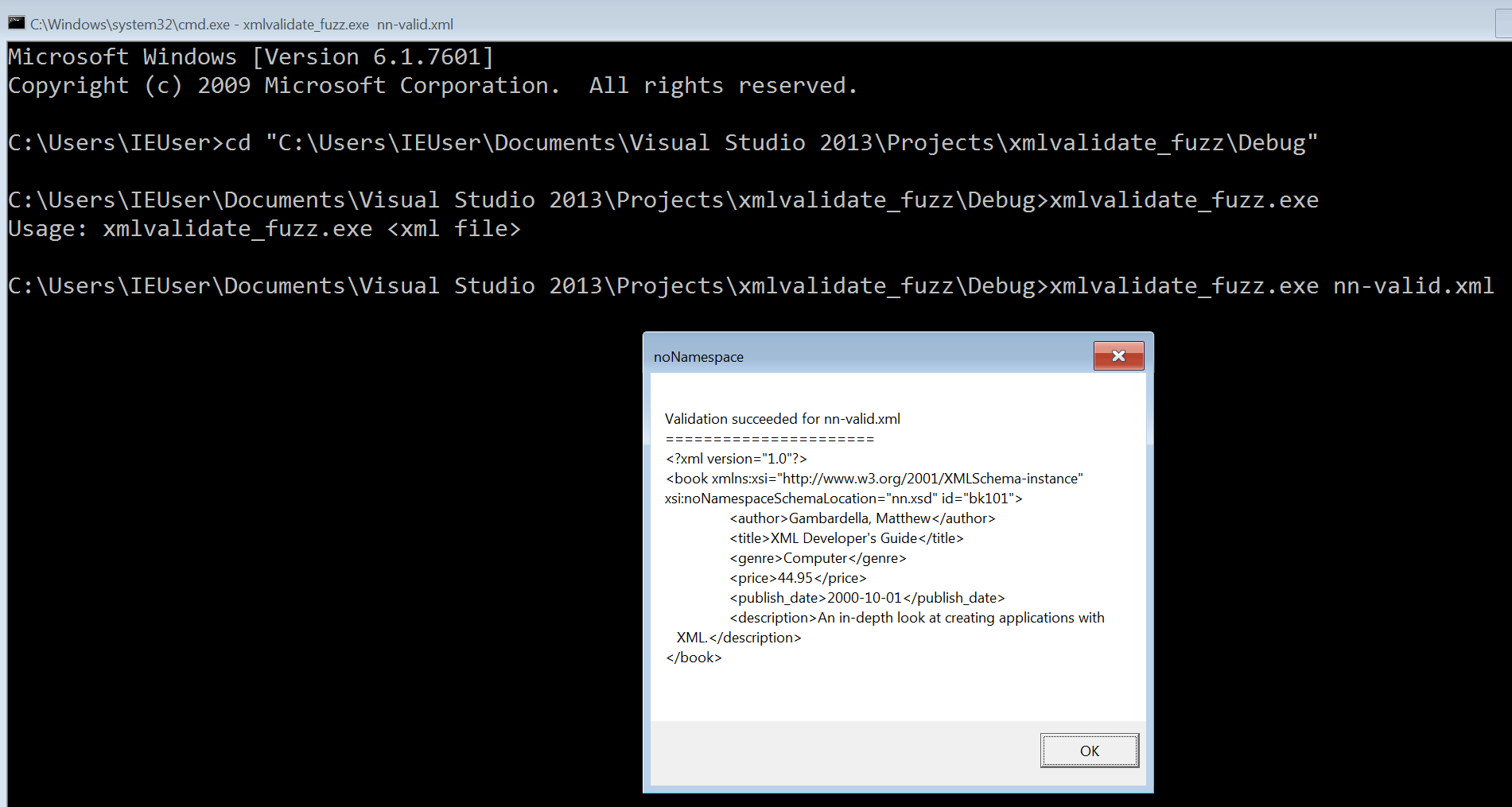 Since the library is closed source, we will be using DynamoRIO’s code coverage library feature via the WinAFL:

WinAFL will start executing the binary ten times. Once this is done, navigate back to the winafl folder and check the log file: 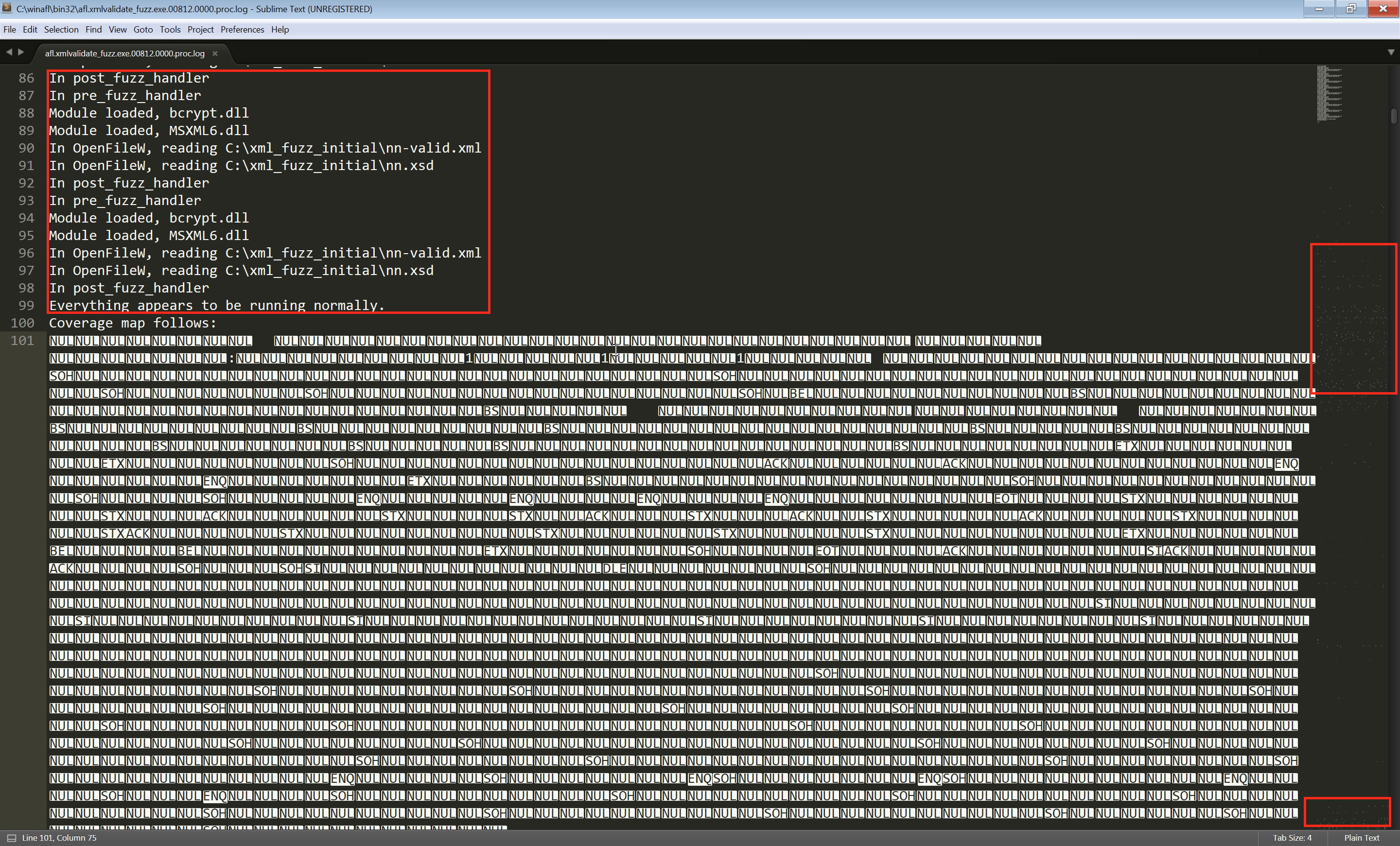 From the output we can see that everything appears to be running normally! On the right side of the file, the dots depict the coverage of the DLL, if you scroll down you’ll see that we did hit many function as we are getting more dots throughout the whole file. That’s a very good indication that we are hiting a lot of code and we properly targeting the MSXML6 library.

This plugin will help us understand better which function we are hitting and give a nice overview of the coverage using IDA. It’s an excellent plugin with very good documentation and has been developed by Markus Gaasedelen (@gaasedelen) Make sure to download the latest DynamoRIO version 7, and install it as per instrcutions here. Luckily, we do have two sample test cases from the documentation, one valid and one invalid. Let’s feed the valid one and observe the coverage. To do that, run the following command:

Next step fire up IDA, drag the msxml6.dll and make sure to fetch the symbols! Now, check if a .log file has been created and open it on IDA from the File -> Load File -> Code Coverage File(s) menu. Once the coverage file is loaded it will highlight all the functions that your test case hit.

Now it’s time to grab some XML files (as small as possible). I’ve used a slightly hacked version of joxean’s find_samples.py script. Once you get a few test cases let’s minimise our initial seed files. This can be done using the following command:

I am not quite sure but I think that the winafl-cmin.py script expects that the initial seed files lead to the same code path, that is we have to run the script one time for the valid cases and one for the invalid ones. I might be wrong though and maybe there’s a bug which in that case I need to ping Axel.

The following screenshot depicts my results: 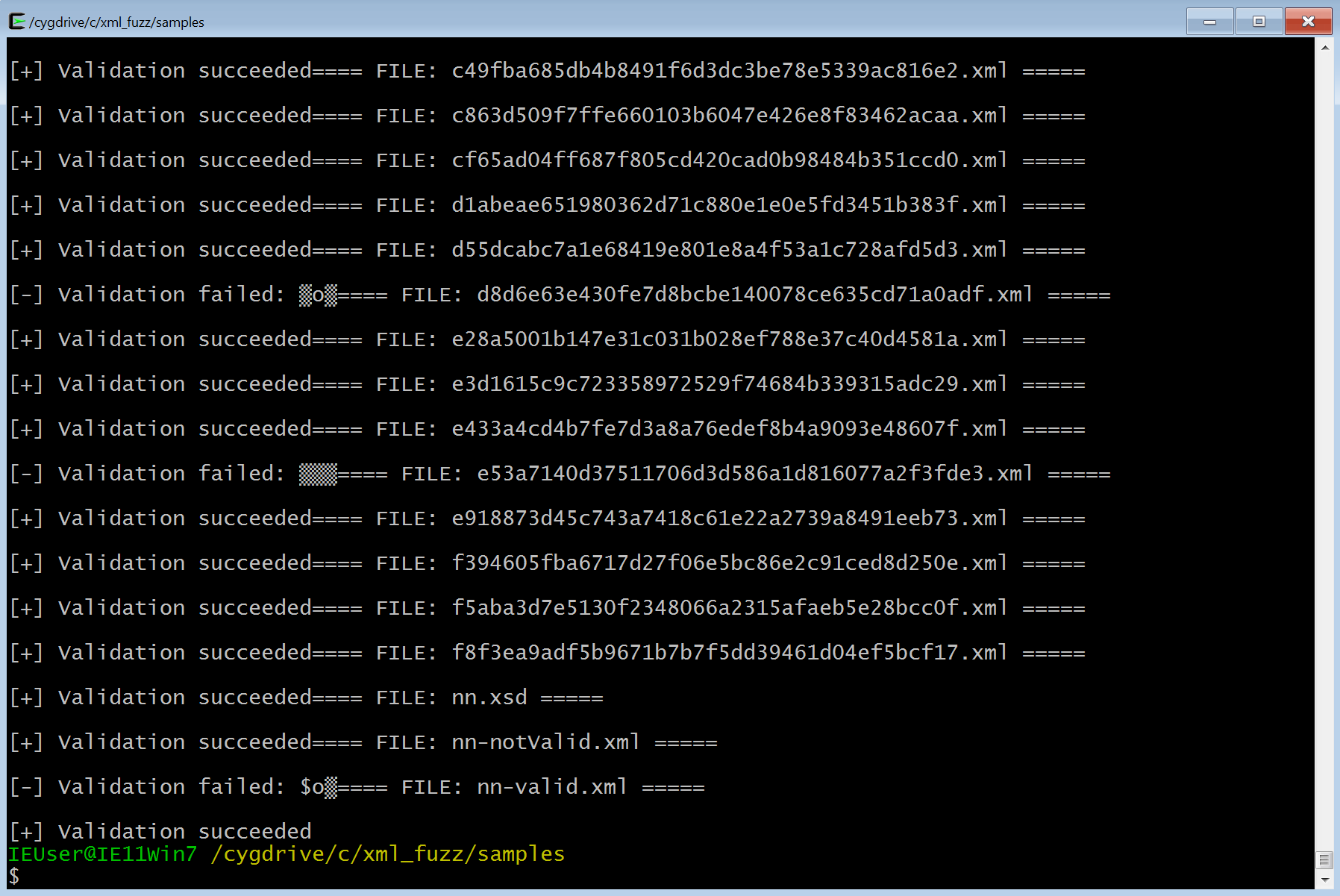 Feel free to expirement a bit, and see which files are causing this issue - your mileage may vary. Once you are set, run again the above command and hopefully you’ll get the following result:

So look at that! The initial campaign included 76 cases which after the minimisation it was narrowed down to 26.
Thank you Axel!

With the minimised test cases let’s code a python script that will automate all the code coverage:

The above script produced the following output for my case: 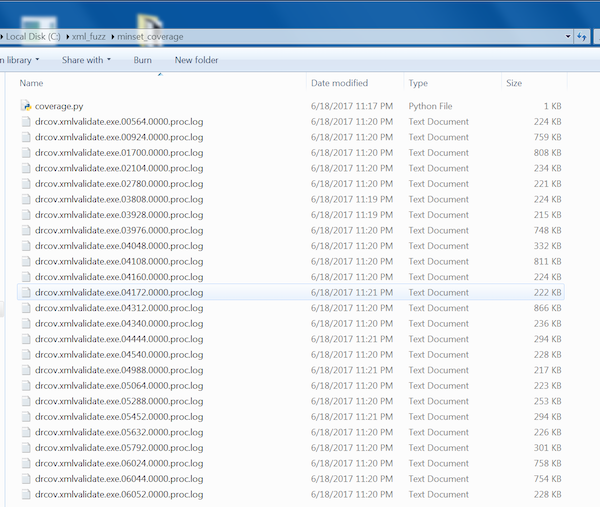 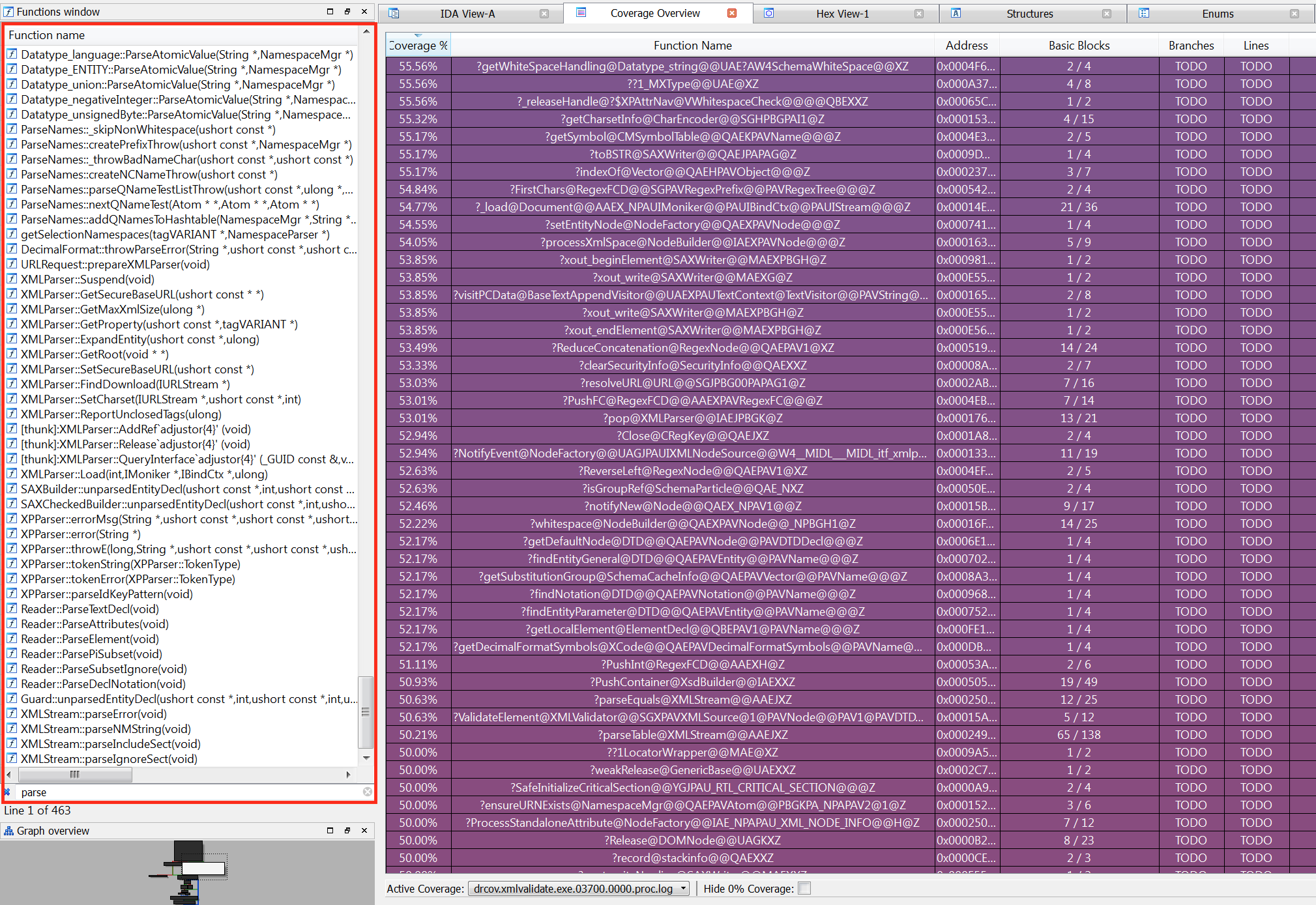 Interestingly enough, notice how many parse functions do exist, and if you navigate around the coverage you’ll see that we’ve managed to hit a decent amount of interesting code.

Since we do have some decent coverage, let’s move on and finally fuzz it!

Let’s kick off the fuzzer:

Running the above yields the following output: 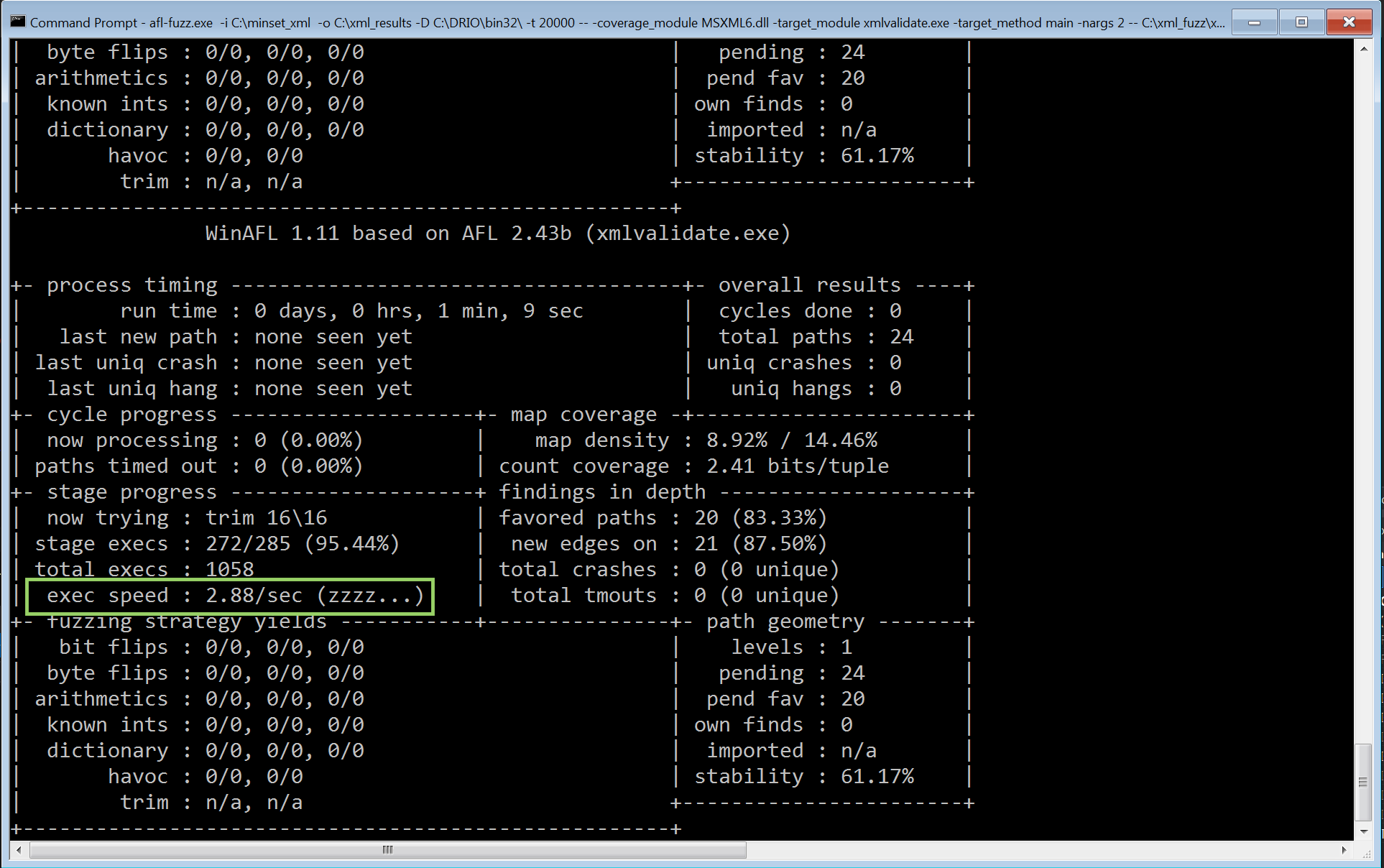 As you can see, the initial code does that job - however the speed is very slow. Three executions per second will take long to give some proper results. Interestingly enough, I’ve had luck in the past and with that speed (using python and radamsa prior the afl/winafl era) had success in finding bugs and within three days of fuzzing!

Let’s try our best though and get rid of the part that slows down the fuzzing. If you’ve done some Windows programming you know that the following line initialises a COM object which could be the bottleneck of the slow speed:

This line probably is a major issue so in fact, let’s refactor the code, we are going to create a fuzzme method which is going to receive the filename as an argument outside the COM initialisation call. The refactored code should look like this:

You can grab the refactored version here. With the refactored binary let’s run one more time the fuzzer and see if we were right. This time, we will pass the fuzzme target_method instead of main, and use only one argument which is the filename. While we are here, let’s use the lcamtuf’s xml.dic from here.

Once you’ve run that, here’s the output within a few seconds of fuzzing on a VMWare instance: 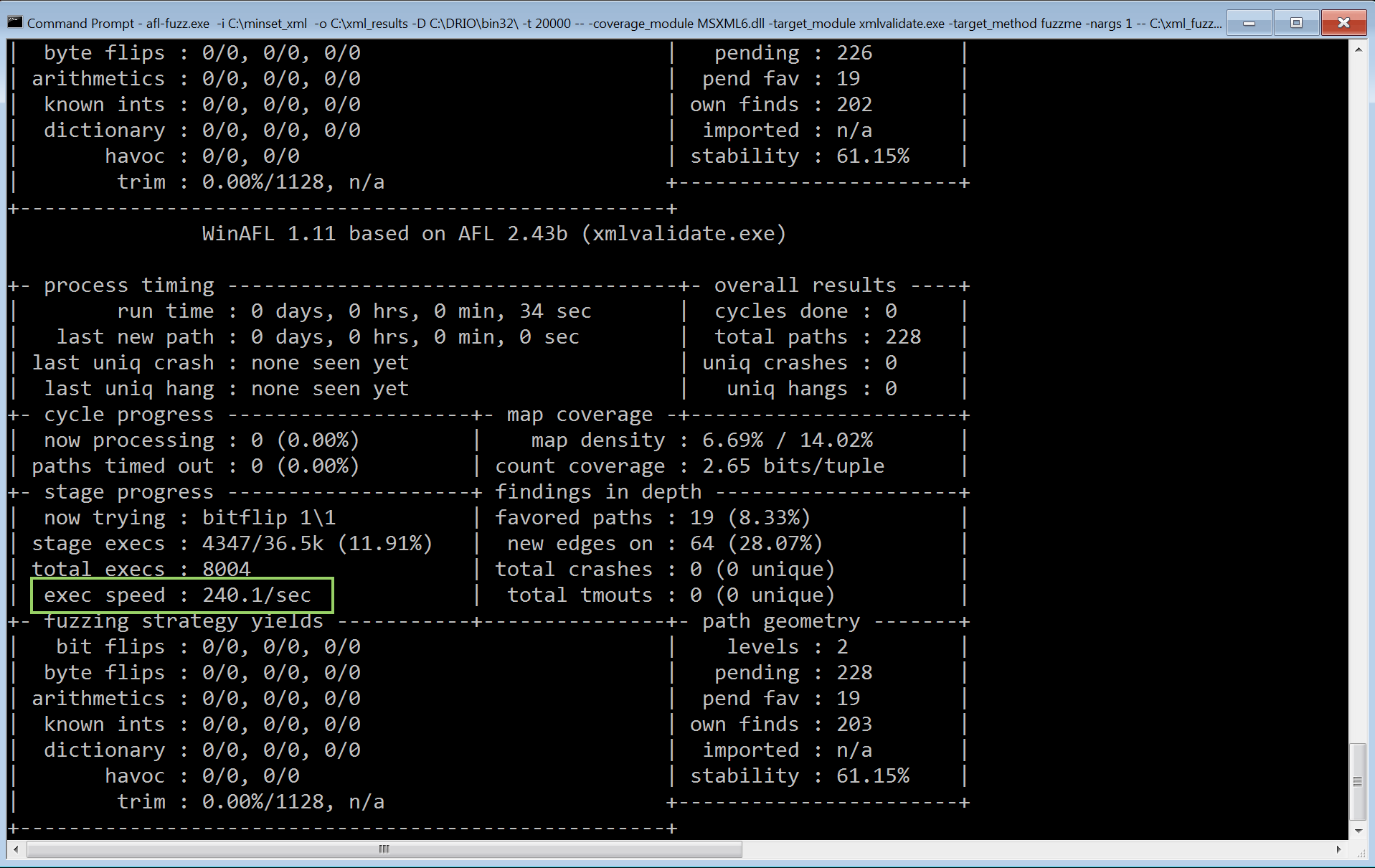 Brilliant! That’s much much better, now let it run and wait for crashes!

Generally, I’ve tried to fuzz this binary with different test cases, however unfortunately I kept getting the NULL pointer dereference bug. The following screenshot depicts the findings after a ~ 12 days fuzzing campaign: 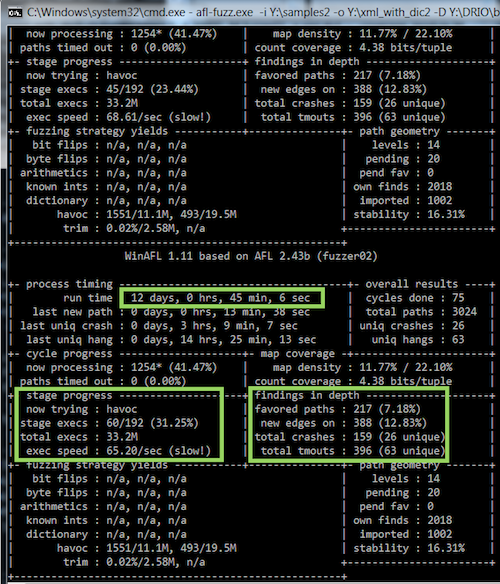 Notice that a total of 33 million executions were performed and 26 unique crashes were discovered!

In order to triage these findings, I’ve used the BugId tool from SkyLined, it’s an excellent tool which will give you a detailed report regarding the crash and the exploitability of the crash.

Here’s my python code for that:

The above script gives the following output: 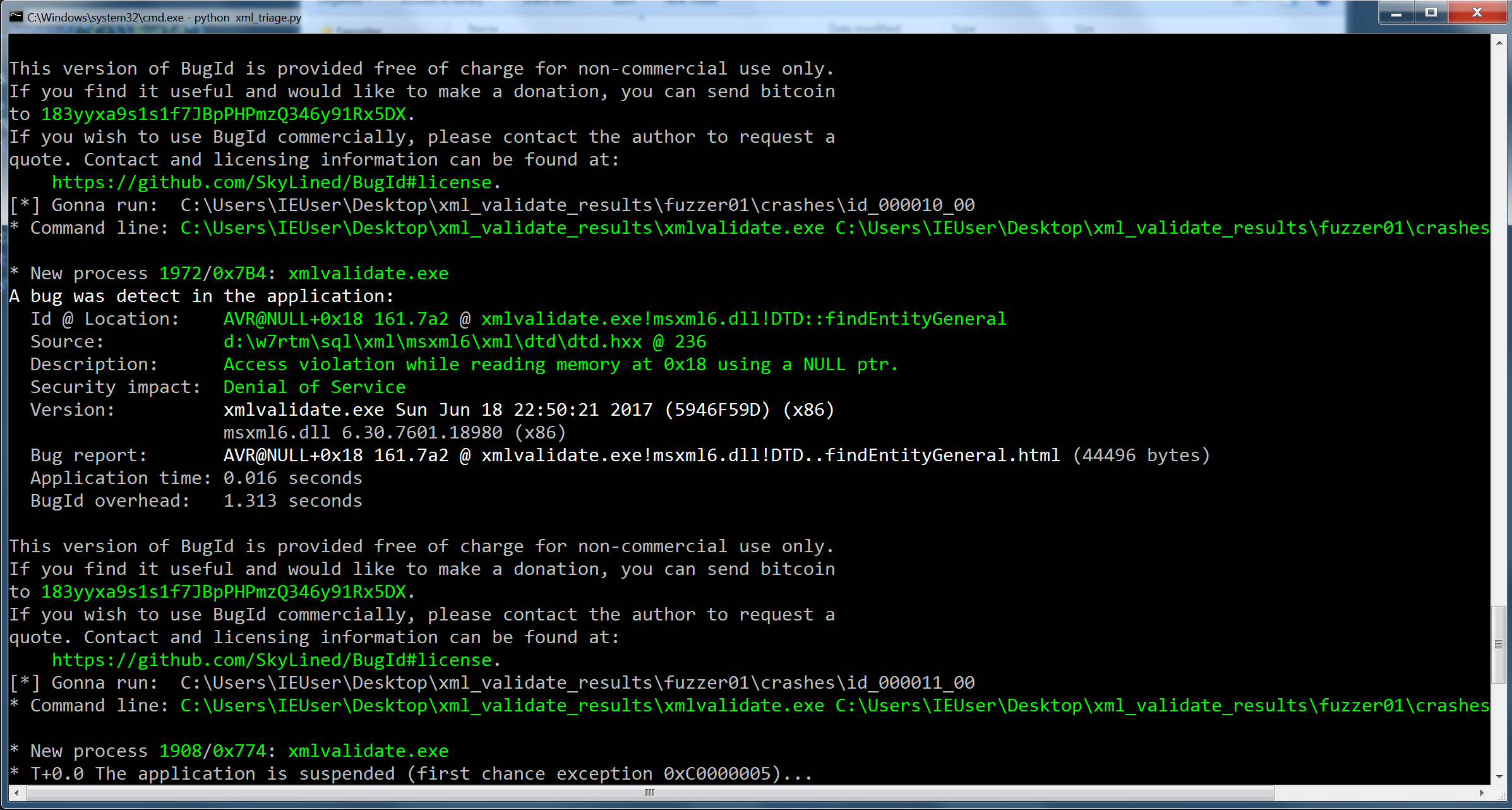 Once I ran that for all my crashes, it clearly showed that we’re hitting the same bug. To confirm, let’s fire up windbg: 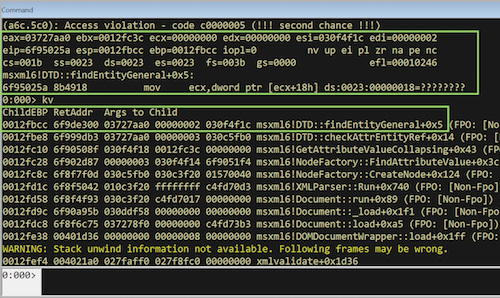 Let’s take a look at one of the crasher:

As you can see, if we provide some garbage either on the xml version or the encoding, we will get the above crash. Mitja also minimised the case as seen below:

The whole idea of fuzzing this library was based on finding a vulnerability within Internet Explorer’s context and somehow trigger it. After a bit of googling, let’s use the following PoC (crashme.html) and see if it will crash IE11:

Running that under Python’s SimpleHTTPServer gives the following: 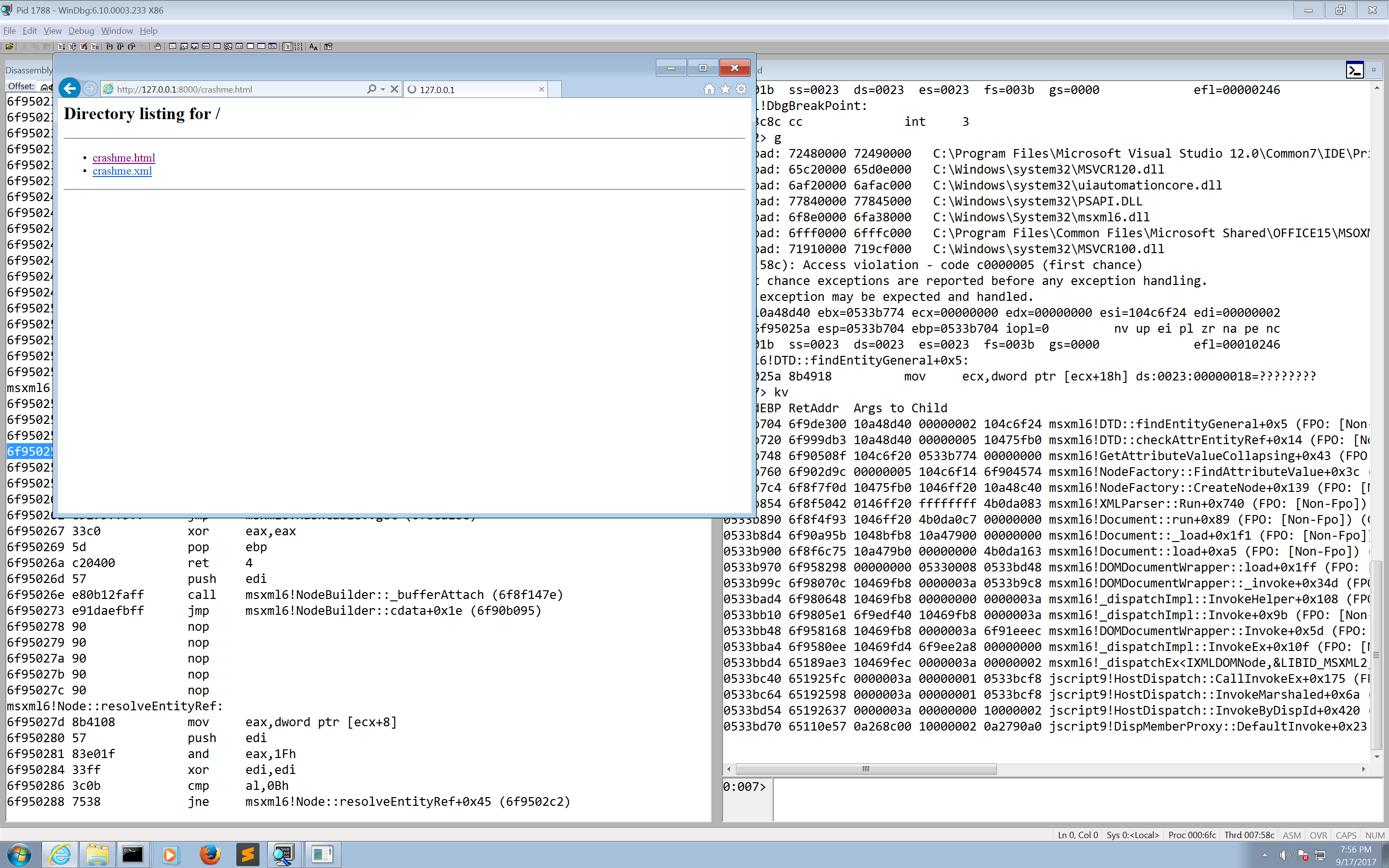 Bingo! As expected, at least with PageHeap enabled we are able to trigger exactly the same crash as with our harness. Be careful not to include that xml on Microsoft Outlook, because it will also crash it as well! Also, since it’s on the library itself, had it been a more sexy crash would increase the attack surface!

After exchanging a few emails with Mitja, he kindly provided me the following patch which can be applied on a fully updated x64 system:

Let’s debug and test that patch, I’ve created an account and installed the 0patch agent for developers, and continued by right clicking on the above .0pp file: 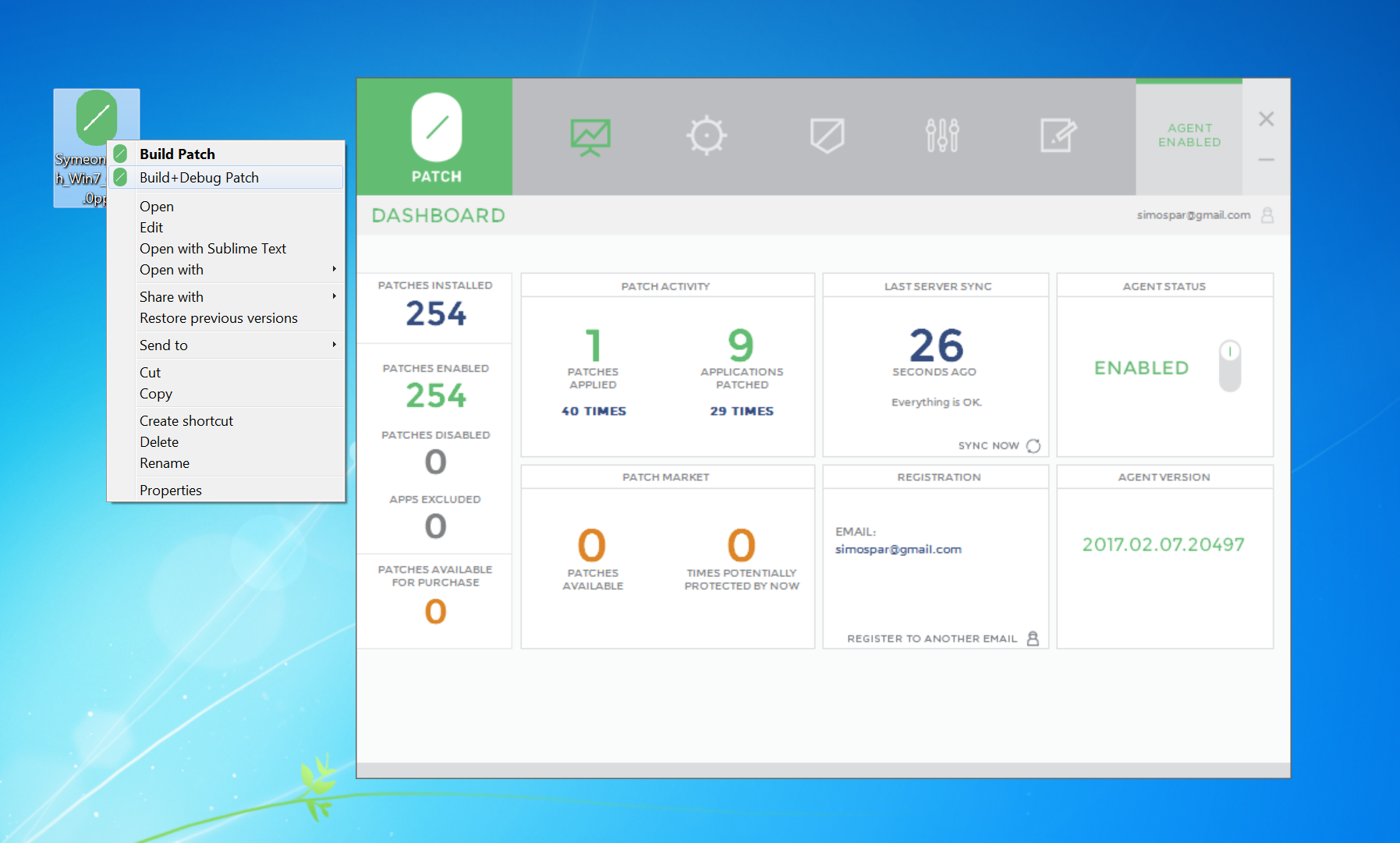 Once I’ve executed my harness with the xml crasher, I immediately hit the breakpoint: 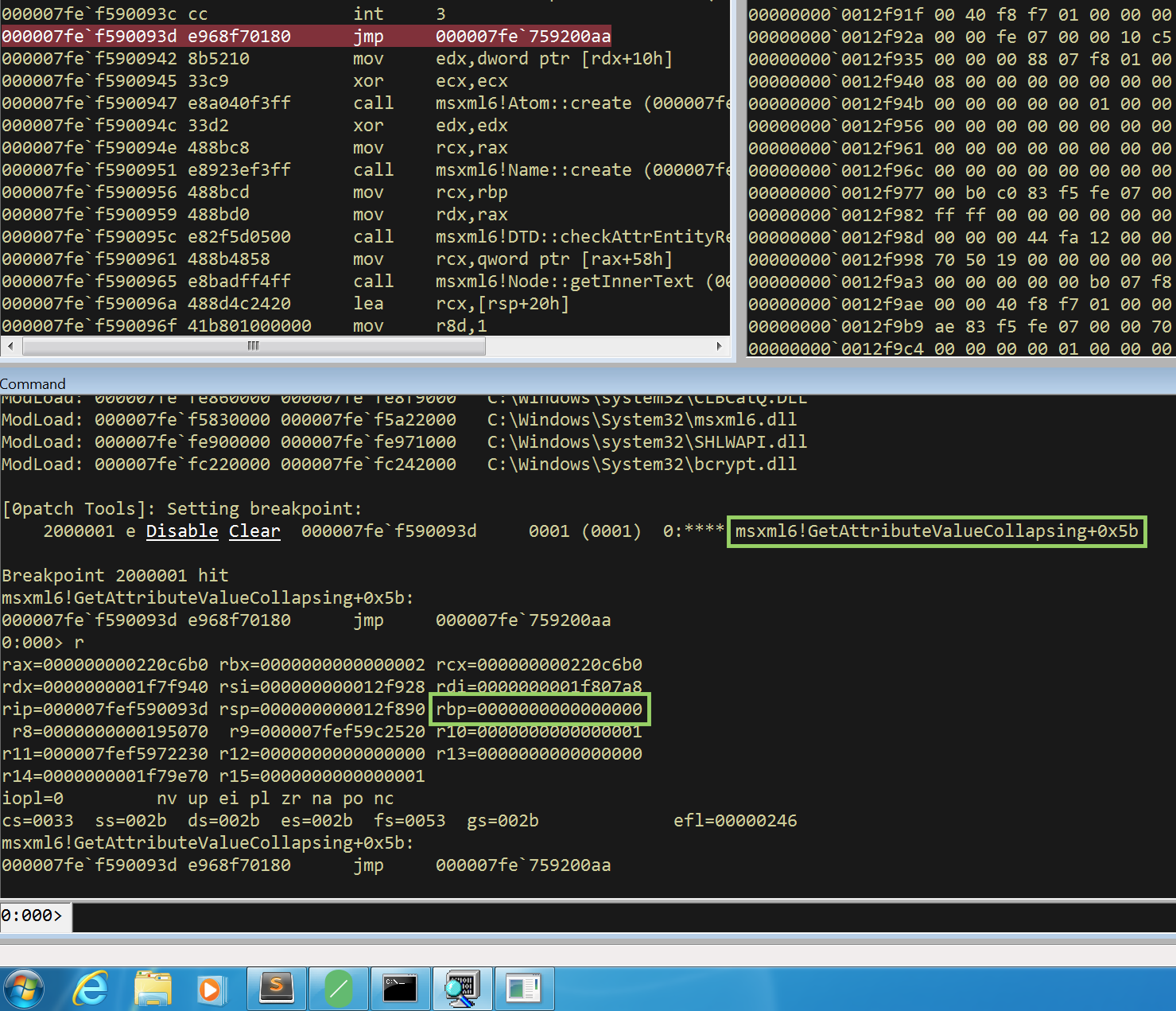 From the code above, indeed rbp is null which would lead to the null pointer dereference. Since we have deployed the 0patch agent though, in fact it’s going to jump to msxml6.dll!0xD097D and avoid the crash: 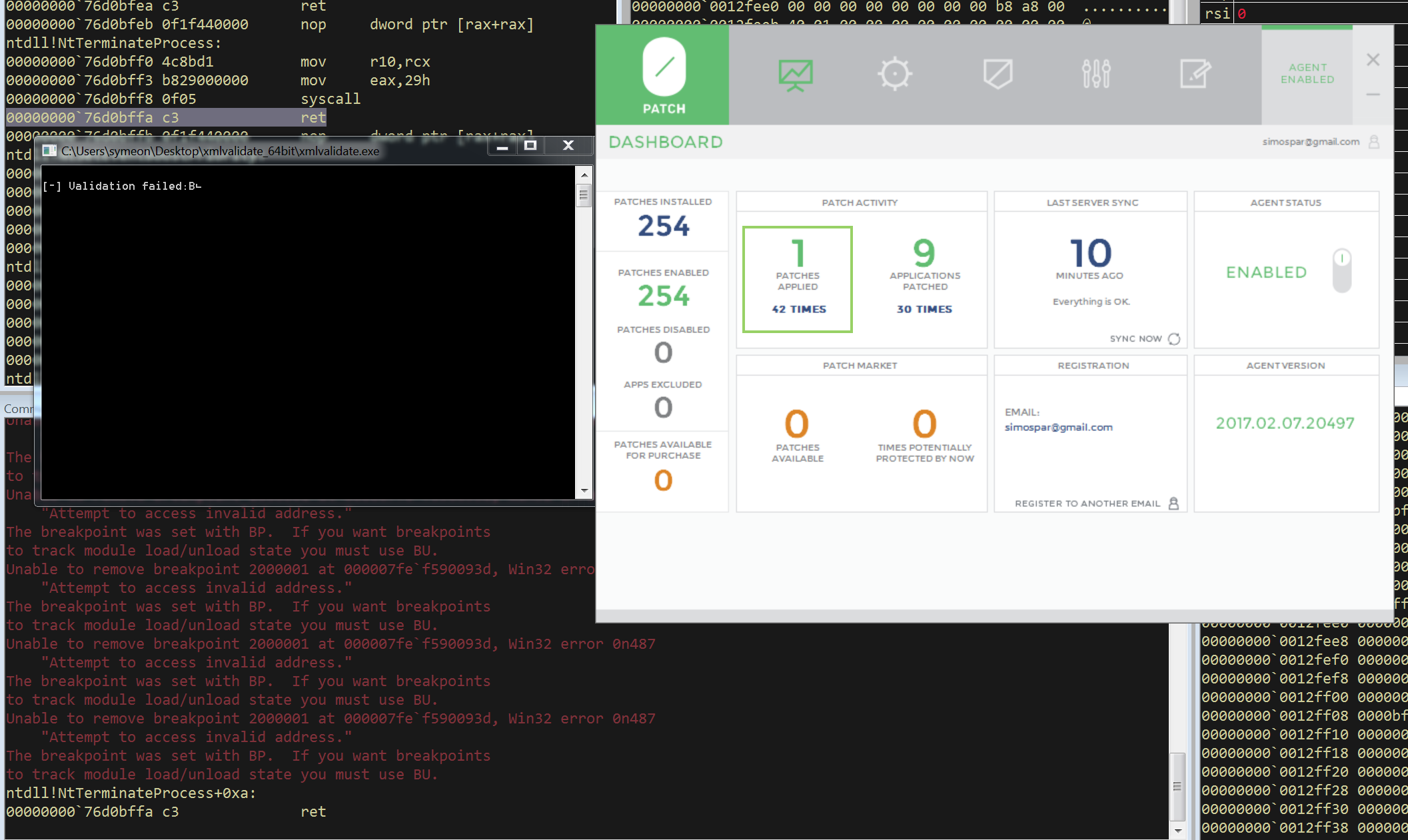 Fantastic! My next step was to fire up winafl again with the patched version which unfortunately failed. Due to the nature of 0patch (function hooking?) it does not play nice with WinAFL and it crashes it.

Nevertheless, this is a sort of “DoS 0day” and as I mentioned earlier I reported it to Microsoft back in June 2017 and after twenty days I got the following email:

I totally agree with that decision, however I was mostly interested in patching the annoying bug so I can move on with my fuzzing :o)
After spending a few hours on the debugger, the only “controllable” user input would be the length of the encoding string:

The above unicode string is in fact our entity from the test case, where the number 3 is the length aparently (and the signature of the function: Name *__stdcall Name::create(String *pS, const wchar_t *pch, int iLen, Atom *pAtomURN))

As you can see, spending some time on Microsoft’s APIs/documentation can be gold! Moreover, refactoring some basic functions and pinpointing the issues that affect the performance can also lead to massive improvements!

On that note I can’t thank enough Ivan for porting the afl to Windows and creating this amazing project. Moreover thanks to Axel as well who’s been actively contributing and adding amazing features.

Shouts to my colleague Javier (we all have one of those heap junkie friends, right?) for motivating me to write this blog, Richard who’s been answering my silly questions and helping me all this time, Mitja from the 0patch team for building this patch.