Back in April I started browsing the MSDN with the purpose of finding a file format that it’s not very common, it has not been fuzzed in the past, it is available on every modern Windows version, and thus something that will give me good chances to find a bug. After spending a few hours, I bumped into this lovely RasEnumEntriesA[1] API: 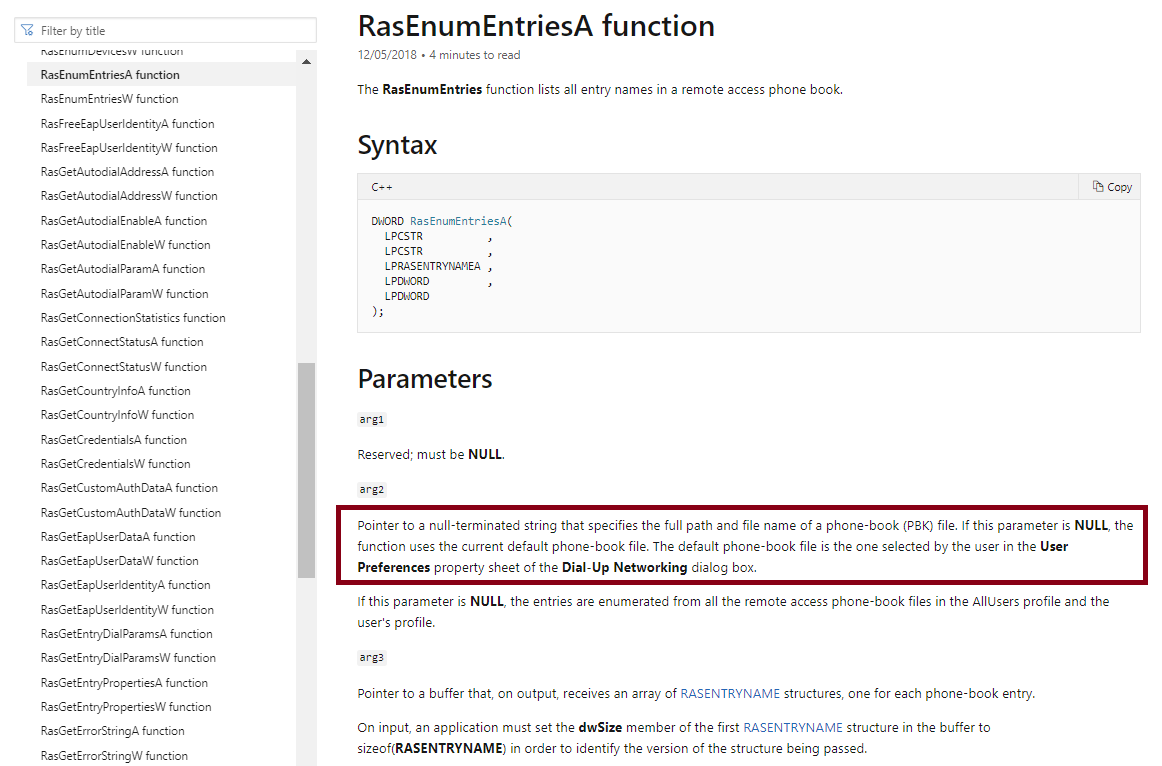 From here, we can see:

Excellent! That’s exactly what I was looking for. In the rest of this article we will dive into the Windows PhoneBook API and proceed with finding samples, creating a harness, checking coverage and finally fuzz this API in order to discover vulnerabilities.

Since I wasn’t familiar at all with the phone book file format, a quick search yielded a few sample file formats: 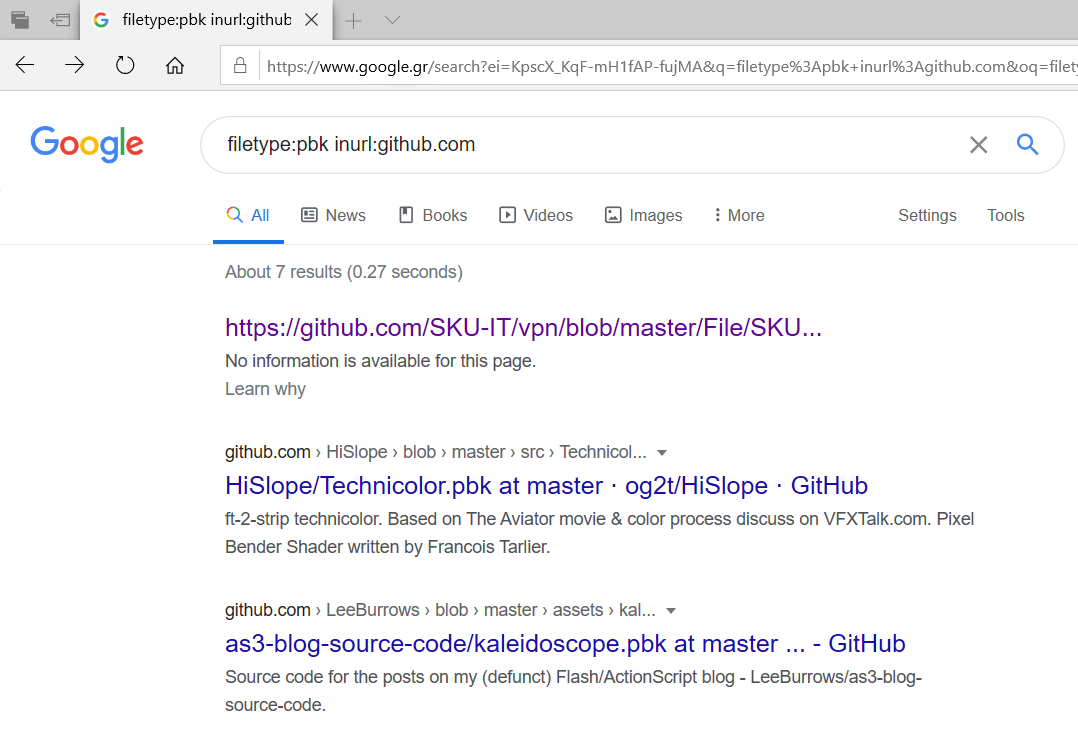 As a second step I’ve quickly grabbed a few samples and experimented a bit. It turns out Windows ships already with an executable living in the system32 directory called rasphone.exe which also gives you a lot of interesting parameters with their description: 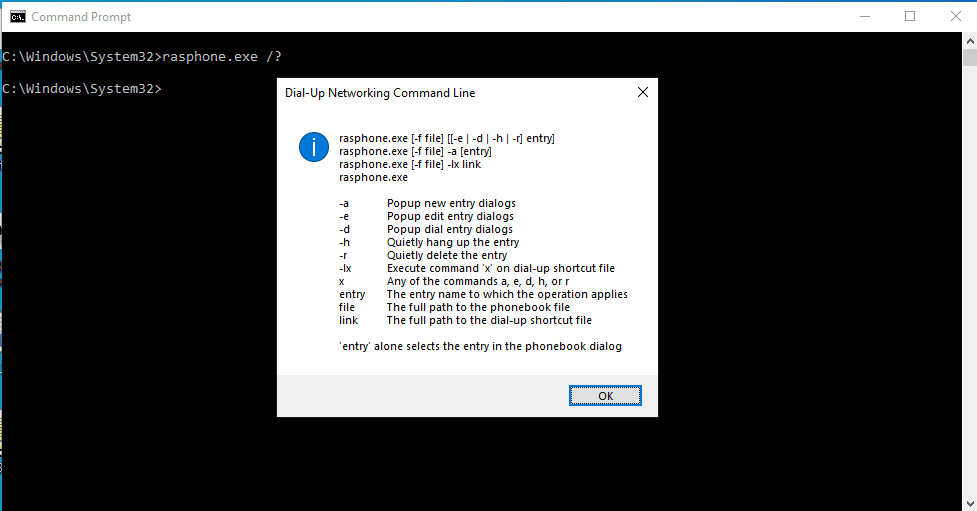 Now the next step is to make sure that we are indeed hitting the RasEnumEntries function… You can probably use a few of the Windows API Monitoring tools, I’ll go with classic WinDbg way and just set a breakpoint :)

In case you haven’t noticed there’s a ‘Note’ at the very bottom of the page:

The ras.h header defines RasEnumEntries as an alias which automatically selects the ANSI or Unicode version of this function based on the definition of the UNICODE preprocessor constant. Mixing usage of the encoding-neutral alias with code that not encoding-neutral can lead to mismatches that result in compilation or runtime errors. For more information, see Conventions for Function Prototypes.

After loading the file by running windbg.exe rasphone.exe -f sample.pbk we can observe the following: 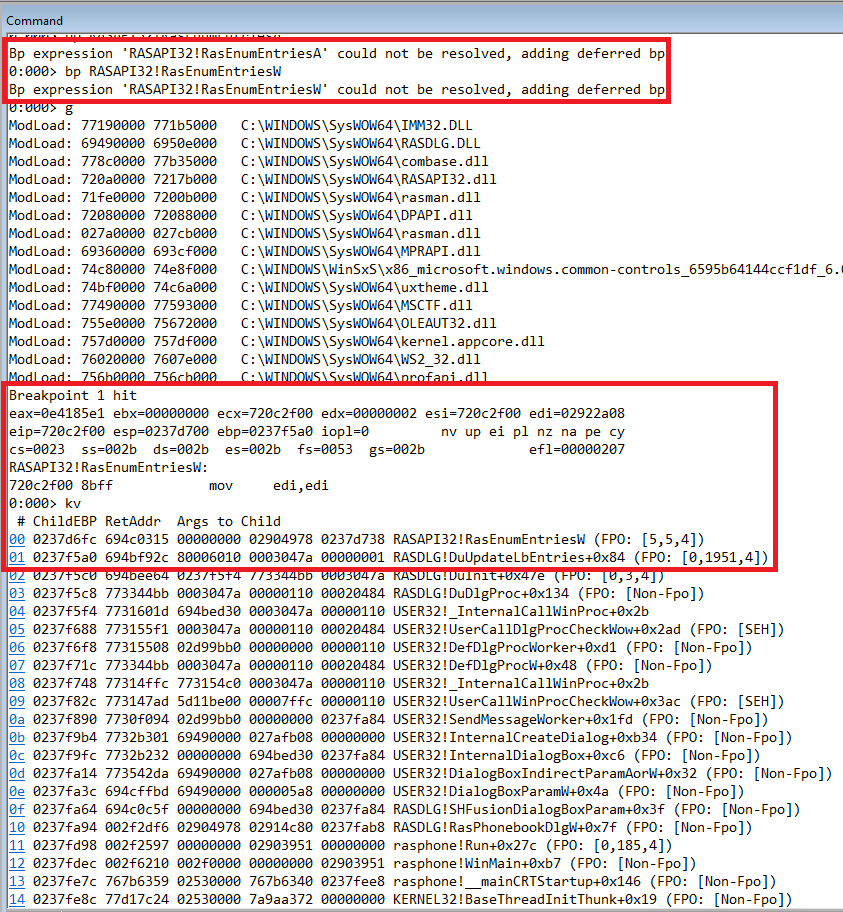 Bingo! Looking at the stack backtrace it is clear that the rasphone binary calls the RASDLG API (a dialog wrapper around the RASAPI32 API) and then eventually we hit our target (RasEnumEntriesW). So far so good!

This is the juicy part of this blog post! If you have been watching @gamozolabs’ streams you know that fuzzing is all about creating decent harnesses and exploring the right path codes! Where do we begin then? Well, for our good luck the previous link to RasEnumEntriesA documentation Microsoft provided us with a decent example (MSDN and github can be your friends!). Reading the sample code, we need to call two times the RasEnumEntries function, one to get the required buffer size and another one which actually performs the real call with the right parameters. The sample is also missing a very important argument, the second parameter to the RasEnumEntries function is NULL, and thus “the entries are enumerated from all the remote access phone-book files in the AllUsers profile and the user’s profile”. Let’s fix that:

Let’s compile the above code and run it with our sample file:

Excellent! I’ve gone ahead and measured the code coverage (see next section) with this initial harness which unfortunately it’s not very impressive. As such, the next step was to slight try to add 1-2 more functions within the RASAPI32 API as to increase code coverage as well as the chances to discover a bug! After a lot of trial and error and looking at the github repos the final harness looks like this: 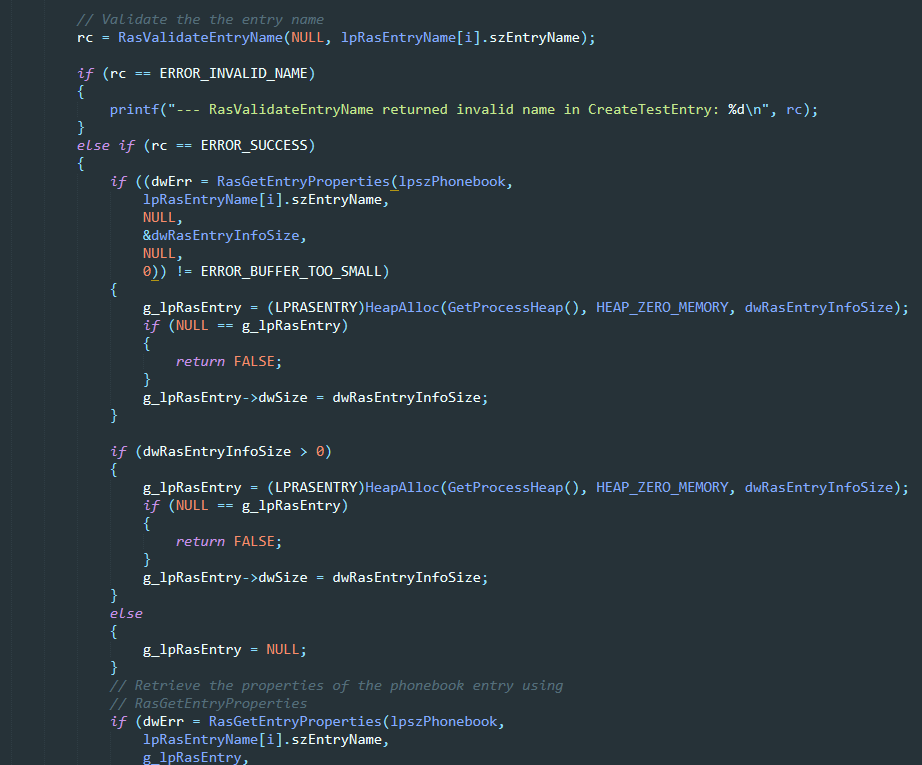 Here, I have added the RasValidateEntryName and the RasGetEntryProperties functions. Running the final version with another file sample resulted in the following screenshot:

With the harness ready and with our samples lying around, I quickly coded this python snippet to automate the process of getting the DynamoRIO files via drcov:

The above simple script gave me the following output: 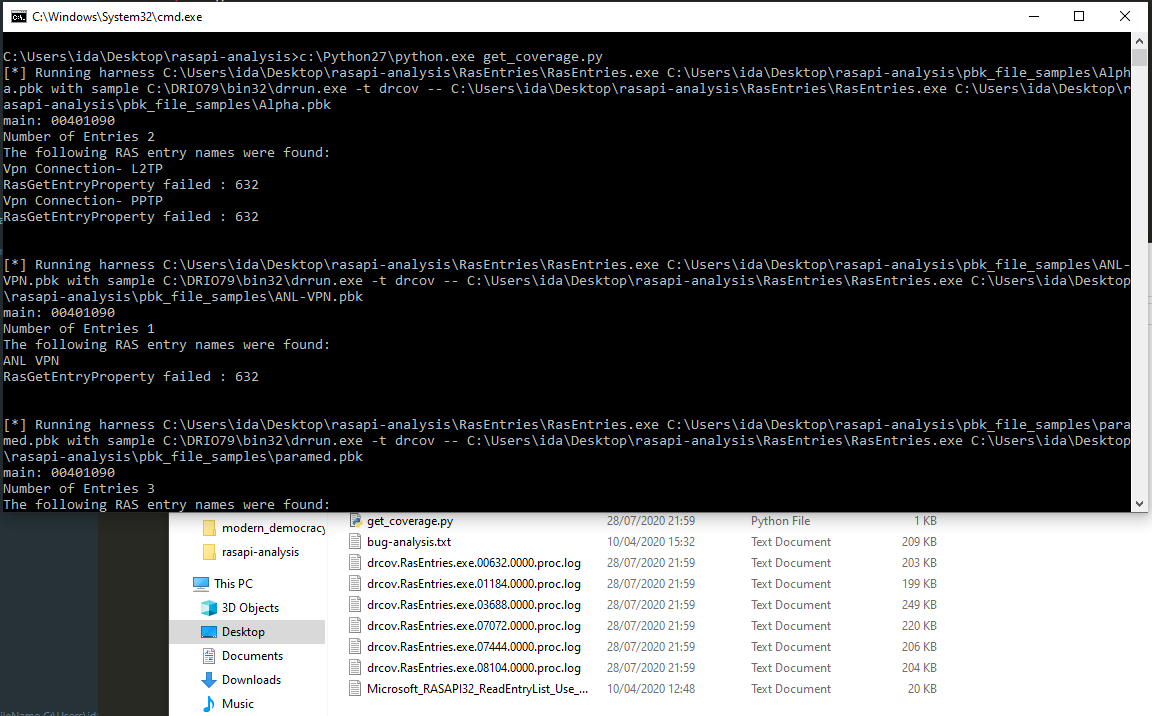 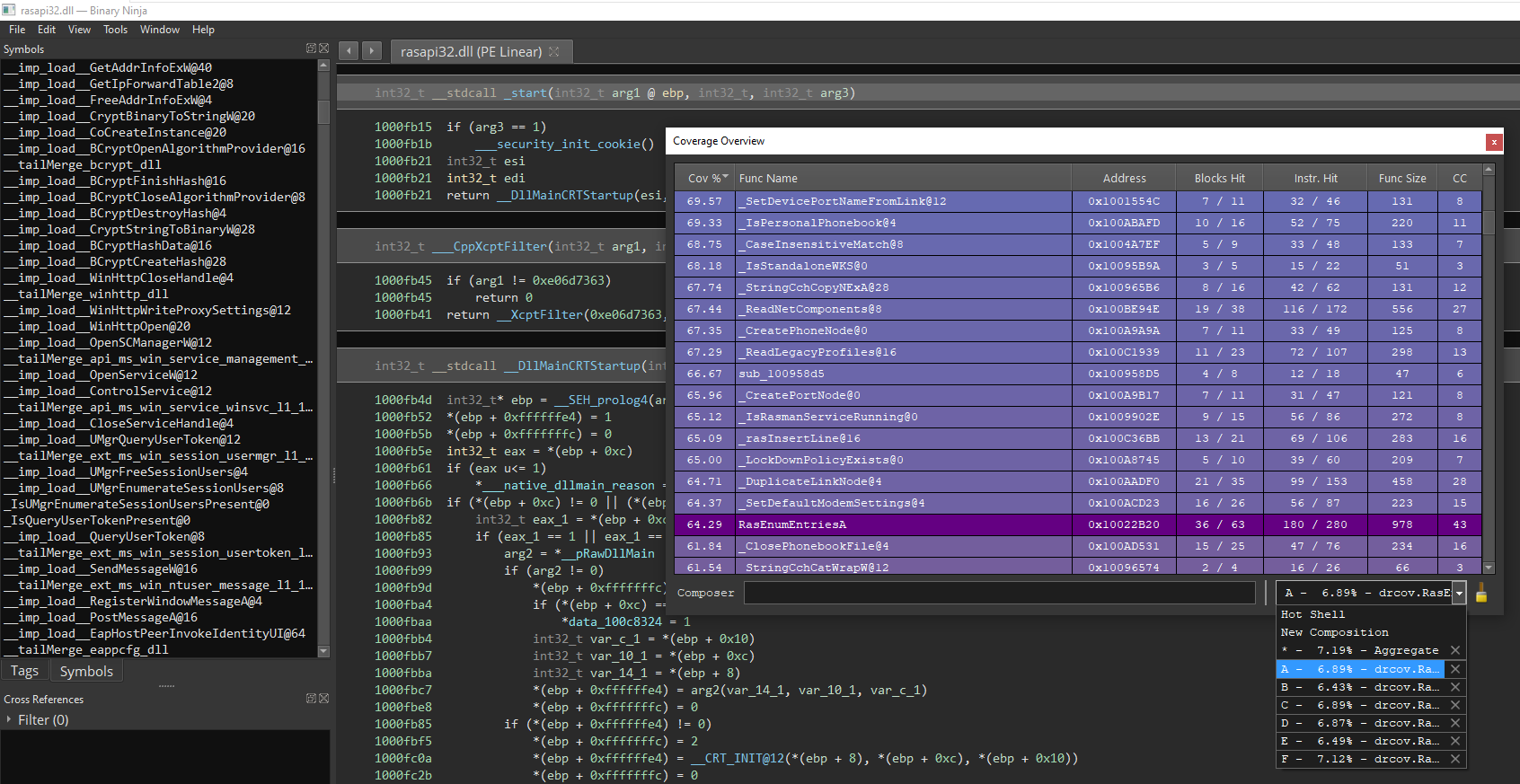 From the screenshot above it can be observed that the coverage is only less than 10%. Ideally, you’d expect the file samples to at least be able to exercise 20% of the module. Nevertheless I decided to move on and see if I get lucky.

With the final harness and our samples together and having measured some basic code coverage now it’s the time to actually go ahead and fuzz it. For this compaign I’ve used two different techniques, one was winafl and the other one was a very simple fuzzing framework I have coded which is simply a wrapper around radamsa and winappdbg to monitor and save the crashes. I have had really success in the past with winafl, however when it comes to targets such as text-based format parsing, winafl unfortunately is not very effective.

For this campaign I’ve used a fully updated Windows 7 x64 VM (from Microsoft Dev before they change it to Windows 10 only versions) as many times I encountered few issues with DynamoRIO not being able to get proper coverage from miscellaneous Windows DLLs (even though I had recompiled winafl with latest DynamoRIO myself). While we are here, I can’t emphasise how this trick has saved me so many times: 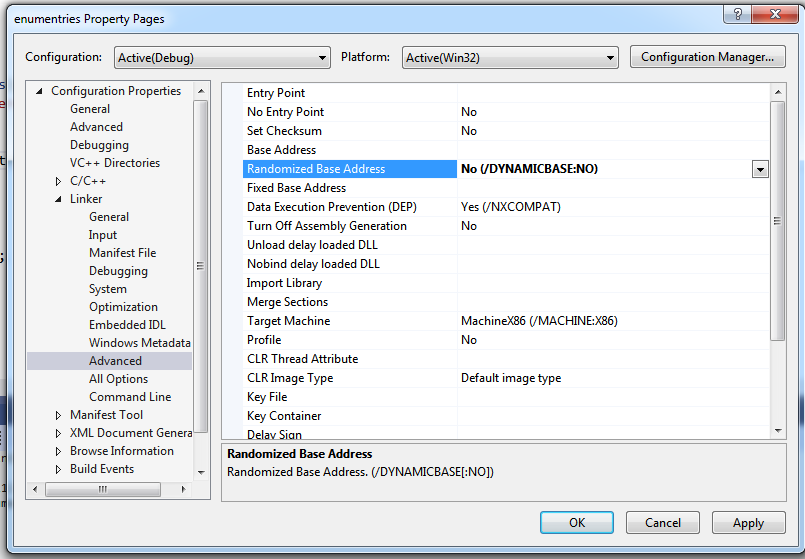 Protip: ASLR will randomise offsets and generally will mess up things - as such when I'm fuzzing I always find it much more easier to disable it and have a static address pointing to main() or my_target().

Next let’s quickly run winafl with the previously obtained address:

.. and let winafl do it all for you! Here, I simply instrumented winafl to target my harness (RasEntries.exe) and for coverage use the RASAPI32.dll DLL. Here are the results after just three days of fuzzing: 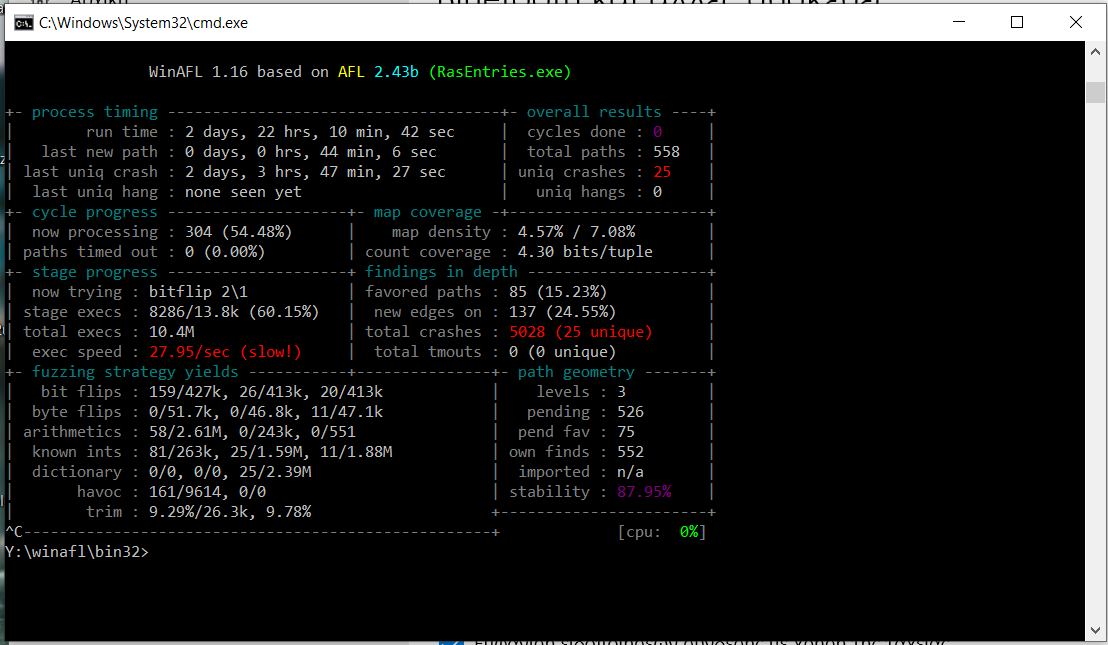 W00t! Quite a lot of crashes with 25 being “unique”! It should be noted here that I managed to pretty much get the first crash within half an hour of fuzzing…few interesting observations:

At this phase I’d also like to mention that running a simple fuzzer such as radamsa I was literally able to get crashes within seconds:

As you can see from the screenshot above the crashers’ size is pretty much the same which indicates that we might be hitting the same bug again and again. After automating the process with BugId, it turns that the 25 “unique” bugs were actually the same case!

With the harness ready and our crasher alive and kicking let’s run it under the debugger: 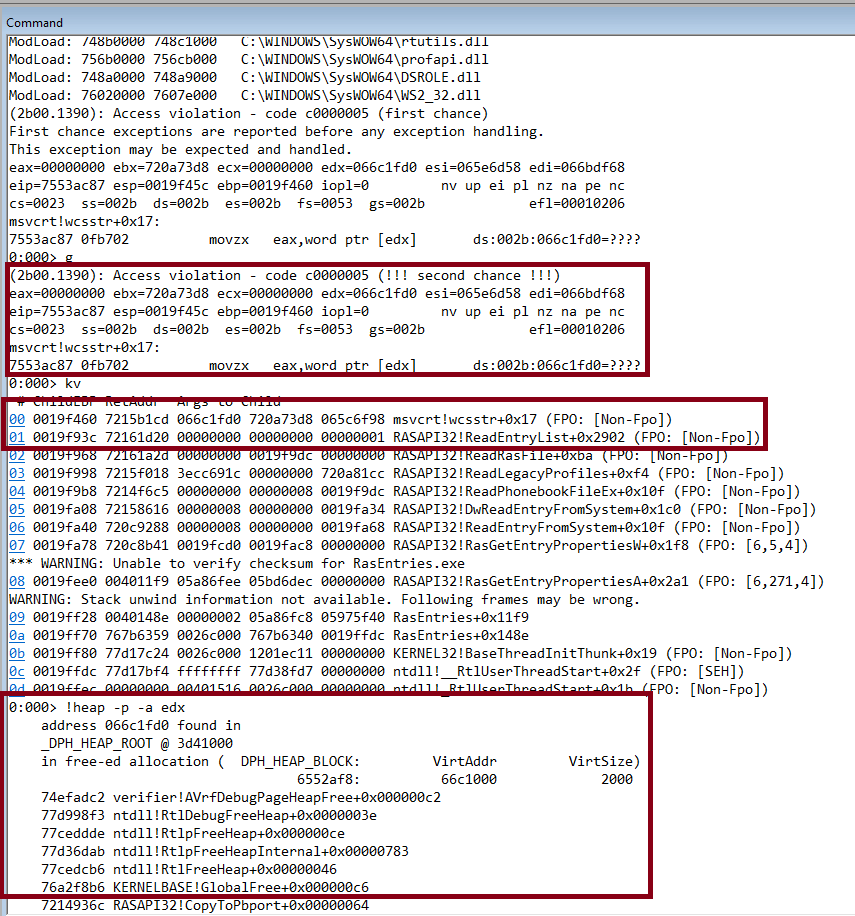 Returns a pointer to the first occurrence of strSearch in str, or NULL if strSearch does not appear in str. If strSearch points to a string of zero length, the function returns str.

which was also called within RASAPI32’s ReadEntryList function. We are trying to dereference the value pointed by edx which according to page verification is invalid. In fact, trying to get more information regarding the memory address stored in the edx register we can indeed see that is value has been previously freed! Wonderful! This clearly is the case of a use-after-free vulnerability, as somehow this memory has been freed, yet the wcsstr function tried to access that part of memory. Now let’s try to actually pinpoint the issue!

For this step I had to switch between the old windbg and the new preview (since the preview was not very reliable when I wanted to examine the free’d memory). Let’s start by examining the free’d allocation: 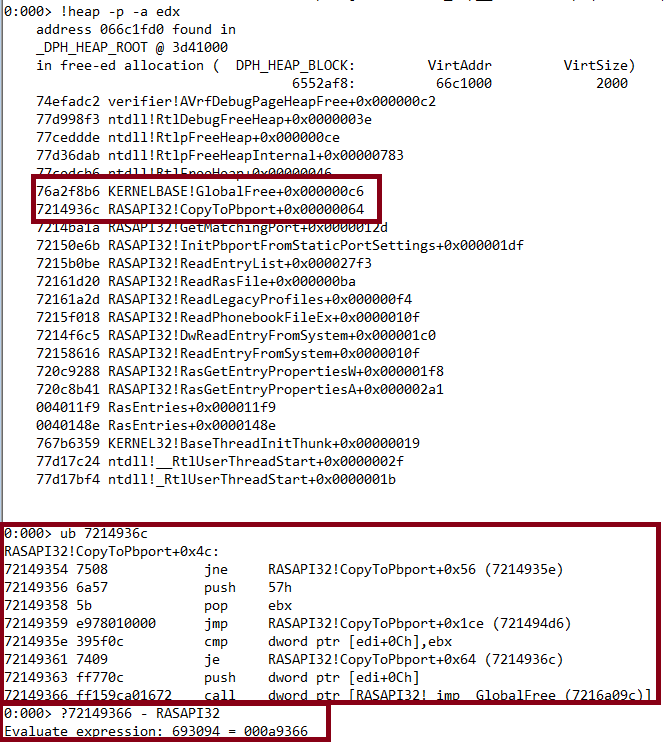 We can derive from above that at 0x7214936c the RASAPI32!CopyToPbport+0x00000064 is responsible for freeing the memory. After doing an Unassemble (ub), the instructions look as follows:

Let’s restart windbg and set up a breakpoint: 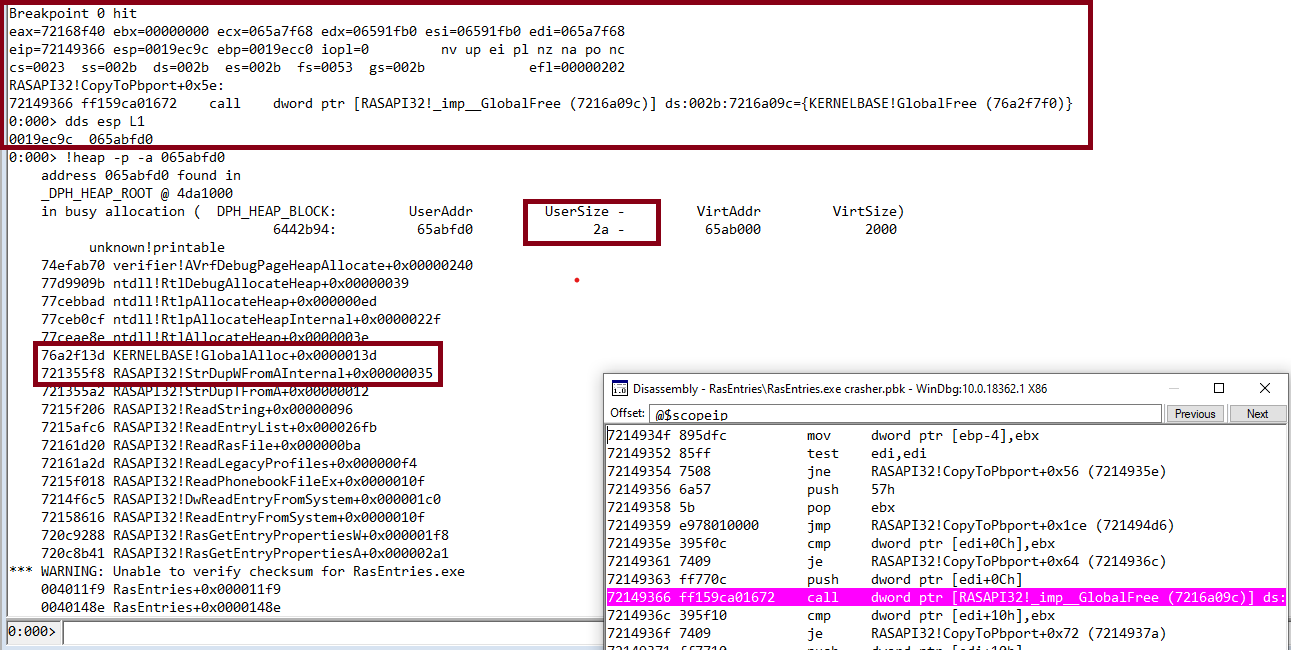 As expected the memory breakpoint was hit. We are just before free’ing that memory, and from the disassembly we can see the KERNELBASE!GlobalFree function gets only one parameter:

To double confirm it we can check the available MSDN documentation from here:

There are a few more interesting bits to notice here, the value of the allocated buffer is 0x2a. This is very important as we need to know whether is value is user controlled or not. How many bytes is this one?

So the initial allocated buffer is 42 bytes. Moving on, which function called this allocation?

After doing some basic reverse engineering, we can see that within RASAPI32’s StrDupWFromAInternal function, the MultiByteToWideChar is initially called, and then depending on the length of the string, GlobalAlloc is called with the following two parameters:

The first one is the static value 0x40 which is uFlags, which according to the documentation:

The second parameter is the previously calculated string length: 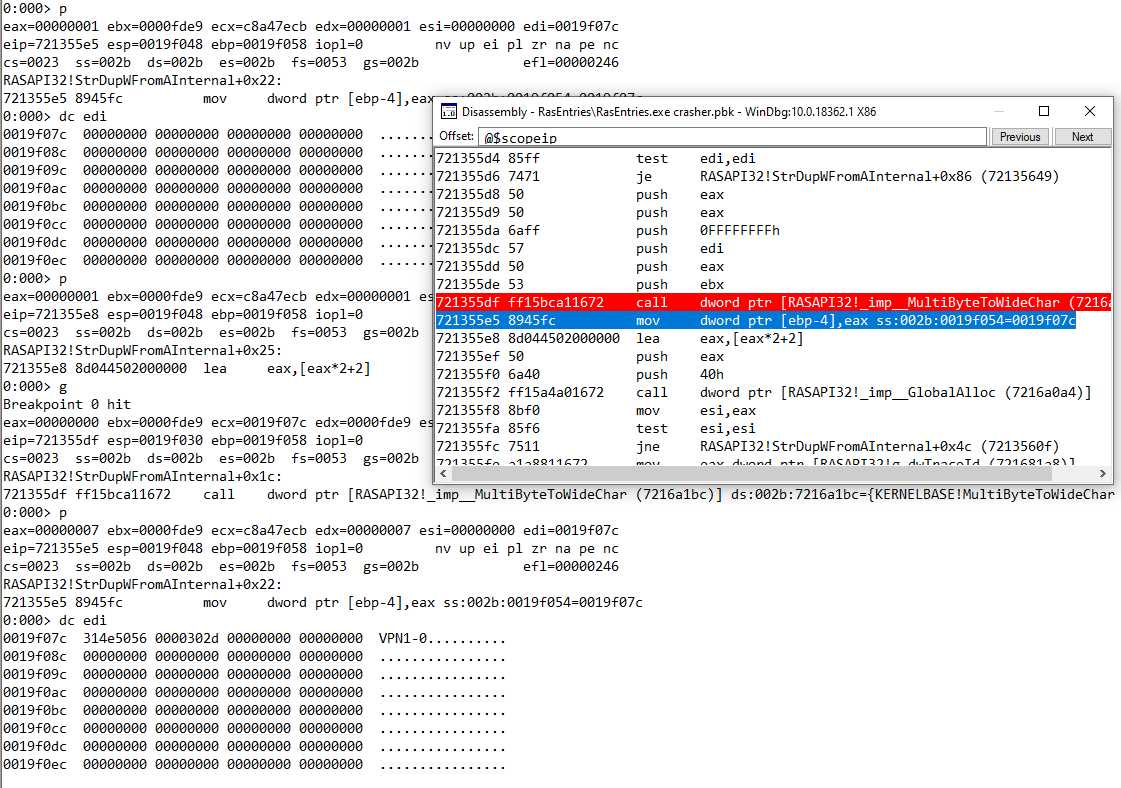 Let’s have a closer look right before the allocation:

So as seen above the length of the “VPN1-0” phone book entry is 6+1, which is user controlled, and once it gets multiplied times two and gets added with two, it’s then used as a parameter to the GlobalAlloc method. So brilliant, we definitely control this one!

However, what caused the free? After spending some time, I figured out that the issue was this entry within the phonebook:

Aha! So a malformed entry causes the StrDupWFromAInternal to bail out and free the memory!

Now that we have a basic understanding of the vulnerability here are my thoughts regarding exploitation of this issue - take it with a grain of salt! Let’s start with the following minimised PoC:

Based on our previous analysis we expect to see eax having the length of the device input “AAAAAAAABBBBBBBBCCCCCCCCDDDDDDDD”+1 = 33 (0x21) bytes: 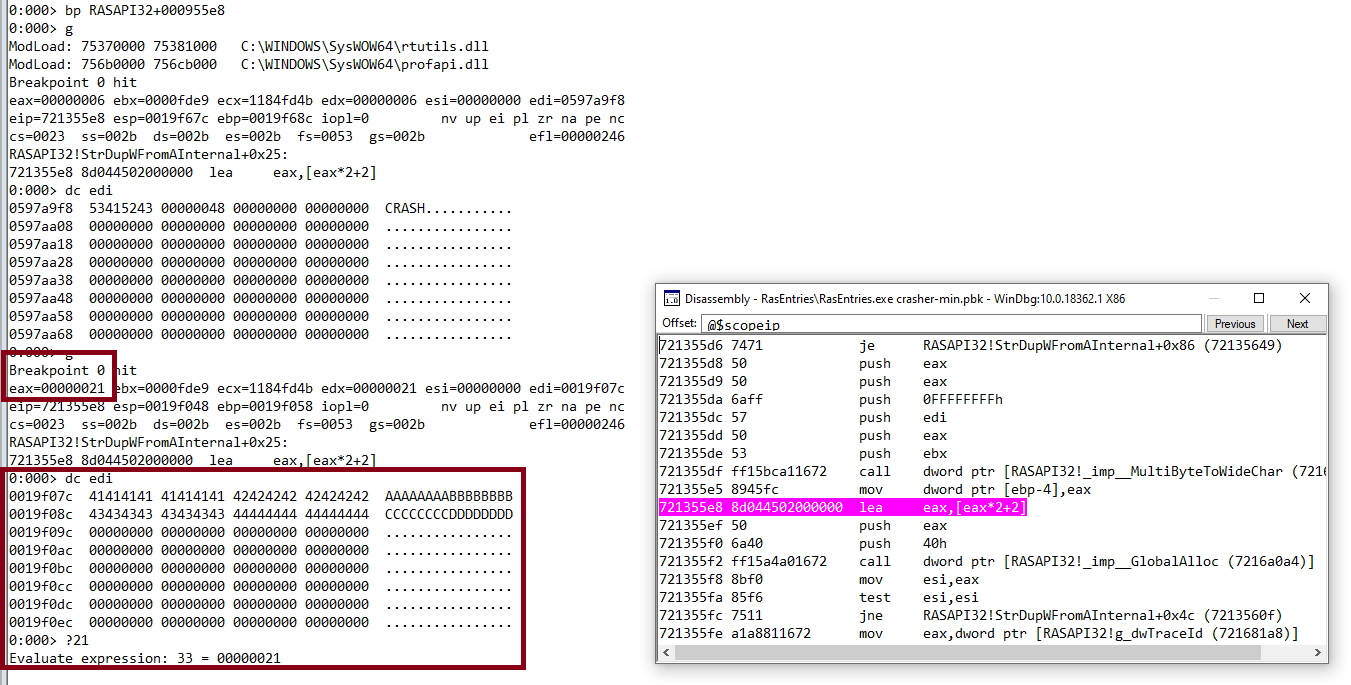 Fantastic, our assumption is correct! And what about the actual allocation?

As seen previously the final value would be eax*2+2 meaning: 0x44 bytes.

Notice above that after monitoring the allocs/frees, we can see that the memory allocator rounded the initial value to 0x48, then three more allocs are happening and then eventually the address is being reused.

Ultimately, we need to find out a way to somehow replace the freed object with something with same size.

Although we do have a usually exploitable primitive such as a use-after-free, unfortunately in reality the lack of a scripting environment makes it very difficult - feel free to prove me wrong! I don’t think there’s an easy method to manipulate the objects, nor mess with the allocators/deallocators. Nevertheless, perhaps someone with more skills is able to find a way to accomplish that.

I hope you enjoyed this article and learnt something - I certainly did!